Home / Blog / Some notes on how to preserve Persian Santoor

Some notes on how to preserve Persian Santoor

Here, you can read some information about Santoor and the reason of it becoming untuned, the time to change its strings, the reason of darkening its strings' color, why moisture is detrimental to Santoor, etc. 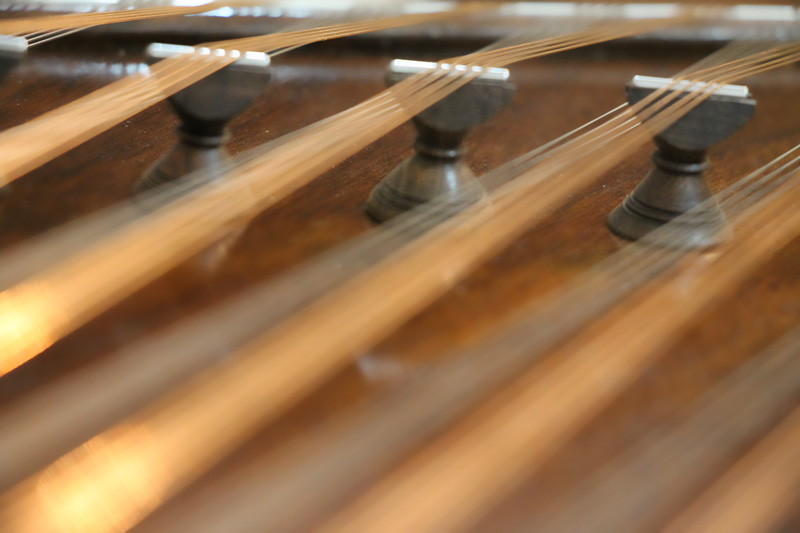 Reasons for Santoor becoming tuneless:
Suppose that the instrument is being kept in an environment with fixed position, temperature, and moisture. Now if only one of its strings becomes tuneless randomly, it is probably due to the turning of normal saddles or bad form of the nut. However, if the whole tuning goes up or down, the problem may be the bad placement of the main bridge.

The Reason of strings becoming dark:
Santoor strings can get oxidized in the presence of oxygen and moisture. This will change the color of strings. However, the strings of some Santoors kept in the same conditions darkens more. This is due to the exchange of electrons as well as the chemical ingredients of the wood and the strings. In order to clean the strings, emeries are used.

Why strings should be changed?
Santoor strings erode in presence of high pressure and the abrasion of metals in the nut and bridges. This will lead to the corrosion and tapering of the strings, which may make it hard to tune the instrument in a desirable way.

Why moisture is detrimental to Santoor?
We all know that Santoor should not be exposed to moisture. But why? Before building Santoor, the wood is still wet and there is water in the wood. Santoor builders dry the wood to make the instrument. This causes the volume of wood to decrease and reach a certain point. Now, if Santoor is exposed to moisture, the volume of wood increases, more pressure will be on strings, and the instrument will get damaged.

Do you have one minute to leave a Google review for us? We'd be so excited to read it!
To submit your review, simply click below and let us know what you think!